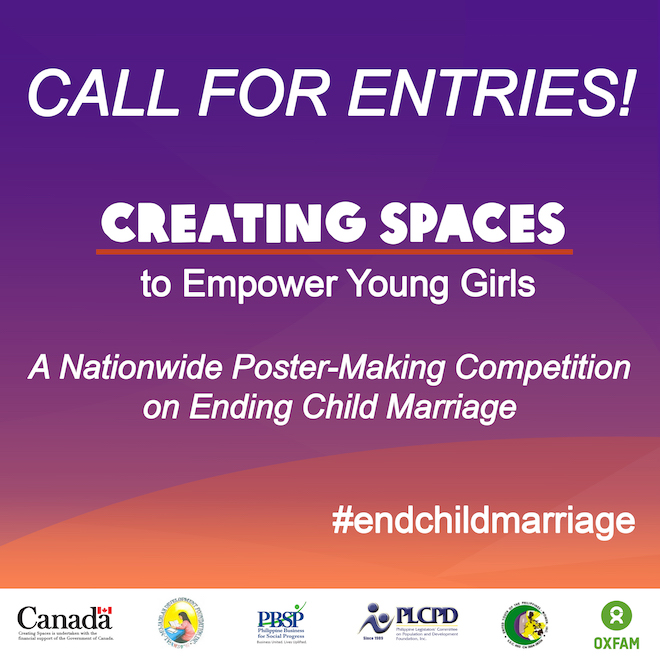 Violence against women and girls (VAWG) is one of the most systematic and widespread human rights violations. One of the expressions of VAWG is child, early, and forced marriages (CEFM). Child marriage is often referred to as “early” and/or “forced” marriage since children, given their age, are not yet able to give free, prior and informed consent to their marriage partners or to the timing of their marriage (UNFPA, 2012).

According to the 2016 State of the World’s Population Report of UNFPA, 47,000 girls around the world are married before the age of 18 every day. In developing countries such as the Philippines, 1 in 4 girls will be married before they are 18. In the Philippines, 15% of women aged 20-24 years old were first married or in union before 18 (NDHS 2013).

The practice of CEFM has serious impacts and poses risks on women and girls’ health and development. The UNFPA states that in developing countries, 9 out of 10 births to adolescent girls occur within a marriage or union and these girls are vulnerable to pregnancy-related complications which are among the leading causes of mortality among adolescents around the world. Women and girls’ development is hindered by CEFM as married girls most likely drop out of school and lose the chance to be educated and gain skills and knowledge which will help her gain a good job and earn for herself and her family (UNICEF, 2016). The perpetration of violence and gender inequality is another negative impact of CEFM. According to PSA, in 2013, 20% of ever-married women aged 15-49 have experienced domestic and/or intimate-partner violence since age 15; while the National Baseline Survey on Violence against Children reported eighty percent prevalence of all forms of violence against children.

The project called Creating Spaces to Take Action on Violence against Women and Girls, supported by the Global Affairs Canada and Oxfam, and implemented in the Philippines by the Philippine Legislators’ Committee on Population and Development (PLCPD) and its partners, recognizes the role of young people in spreading awareness on the prevalence and impact of child marriage on young people’s health and development and encouraging and taking action to address this pressing issue.

Children and youth can help create spaces by advocating for the rights of women and girls through art. It is in this regard that PLCPD is organizing a nationwide poster-making competition with the theme, #EndChildMarriage: Creating spaces to empower young girls.

2. Who can join: The competition is open to young people aged 15 to 19 years old who are residing in the Philippines. Family members and relatives of PLCPD’s employees are not allowed to enter the competition.

3. Entries: Posters submitted must be all-original, unpublished, and not previously submitted to other competitions. Posters must be hand-drawn using any medium (water color, oil pastel, acrylic, crayons, etc.). Poster size should be 15 inches x 20 inches or ¼ illustration board and design must be in landscape (horizontal) format.

You may email a high resolution photograph or scanned soft copy of your artwork to PLCPD via creatingspacesph@plcpd.org.ph (cc: plcpdfound@plcpd.org.ph) on or before 24 September 2018. Please attach your photographed artwork or scanned copy of your artwork to your email with the subject: Entry to #EndChildMarriage nationwide poster-making competition.

Please keep your original artworks. PLCPD will collect original winning entries as they will be showcased on October 11, in celebration of the International Day of Girl Child and in other creative activities of the project.

4. Copyright. By participating in this poster-making competition, the contestant certifies that the submitted artwork is a single work of original material created solely by the participant and no other party has any right, title, claim or interest in the poster. Names and logos of schools and organizations are not allowed to appear in the poster entries. Winning entries will be deemed property of the Philippine Legislators’ Committee on Population and Development.

Participants may submit multiple entries but can qualify in the Top 13 only once.
Winning entries will also be featured in the 2018 calendar to be produced by the Creating Spaces project and in other publicity materials (printed or online) made by PLCPD related to the campaign. Original artwork/ hard copies will be displayed in exhibits conducted by Creating Spaces Project.

5. Criteria. The criteria for judging will be as follows:
Relevance to the theme 50%
Creativity 30%
Originality 20%

7. Announcement of Winners. Winners will be notified via text, call or email by PLCPD staff. The awarding of winners will take place in an event of Creating Spaces to be held in celebration of the International Day of the Girl on October 11 in Metro Manila.