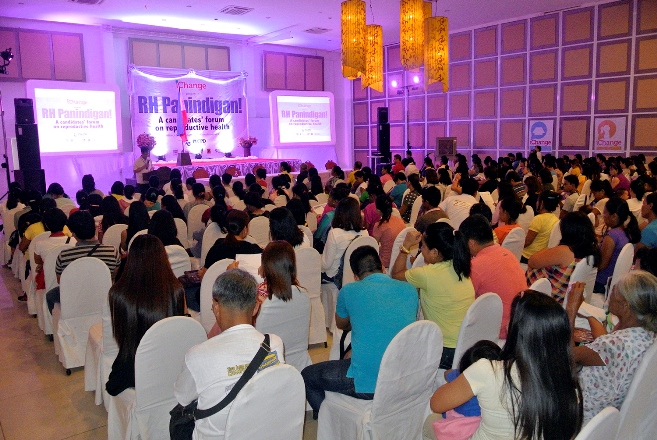 The Philippine Legislators’ Committee on Population and Development (PLCPD) led the call, urging bets to defend the right of all, especially women, to family planning and reproductive health.

Ms. Quilala stressed the importance of ensuring availability of and access to family planning information and services and its long-term positive impact on national development.

“The enactment of the RH Law, after more than 10 years in the legislative mill, is a huge step in the right direction. However, the constant challenge from anti-RH groups threatens to derail our progress in family planning and maternal health,” she said.

“The Senate recently slashed the budget for family planning by P1 billion, delivering a severe blow to efforts to increase contraceptive use that will contribute not only to meeting couples’ fertility goals but also to reducing maternal deaths in the country,” Ms. Quilala lamented.

“The next set of leaders, both at the national and local levels, should ensure that there is sufficient funding for the implementation of the RH Law, especially family planning,” said Ben de Leon, president of the Forum for Family Planning and Development.

“As we celebrate Women’s Day today, we must recognize the critical role women play in society. It is thus important that the government provides women the information and services that would contribute in improving their health and well-being, especially their reproductive health,” he said.

“It is also crucial that the youth are provided RH information and services to prevent unplanned pregnancy and sexually-transmitted infections like HIV,” he added.

Around 9% of the total maternal deaths in Palawan are among teenage mothers (15-19 years old). Countrywide, teenage pregnancy is on the rise. 14% of Filipino girls aged 15-19 years are either pregnant or already mothers – twice the number in 2002 – based on the 2013 Young Adult Fertility and Sexuality Study.

Meanwhile, 28% of new HIV cases in the Philippines from 2011 to 2015 are among young people 15-24 years old. Palawan has the highest number of HIV cases in the MIMAROPA region, according to reports.