The UN Guiding Principles on Business and Human Rights, also called the Ruggie Framework after UN Special Representative Prof. John Ruggie, lay out the responsibilities of corporate entities in upholding human rights in their business operations. It is grounded in three pillars, namely: 1) the State’s duty to protect; 2) corporate responsibility to respect, observe due diligence, and avoid infringing on HR, and 3) remedy human rights violations.

With a growing workforce and the gaining momentum for economic development, the Philippines needs to balance its commitment to uphold human rights with the drive to draw corporate interest into doing business in the country.

This material aims to introduce to the UN Guiding Principles on Business and Human Rights to media practitioners.

Adolescence is often described as an exciting and challenging phase in one’s life.  It is at this phase when children traverse adulthood and encounter various changes in their social and physical environment. Consequently, it is also at this phase when the foundations of their childhood would play a significant role in terms of their behavior, attitudes, as well as in decisions that they will have to make every day.

A primer on the Reproductive Health Law

In 2012, the Philippines finally saw the enactment of the Reproductive Health (RH) bill. After a long and arduous battle in the legislative mill, surpassing four Congresses in fact, Filipinos can now benefit from a law that will provide comprehensive information and services on reproductive health. With the passage of the RH bill, or what is now known as RA 10354 or the Responsible Parenthood and Reproductive Health Act of 2012, the national government and local government units (LGU) will be able to strategically and comprehensively address perennial problems of the country on maternal mortality, child mortality, teenage pregnancies, and prevalence of HIV and AIDS, among others. In the same manner, RA 10354 is also seen to contribute in addressing population and development concerns of the country –foremost of which is poverty.

Republic Act No. 10354 or the Responsible Parenthood and Reproductive Health Act (RH Law) was enacted in December 2012. The much-awaited measure affirms the State’s responsibility to protect each person’s right to reproductive health by providing for programs, mechanisms, and funding to improve access to information and services on family planning, as well as to maternal, newborn and child health care, among others.

To Spank or not to Spank

The United Nations Committee on the Rights of the Child defines “corporal” or “physical” punishment as any punishment in which physical force is used and intended to cause some degree of pain or discomfort, however light. The Committee also considers as corporal punishment other non-physical but equally cruel and degrading forms of punishment, which includes “punishment which belittles, humiliates, denigrates, scapegoats, threatens, scares or ridicules the child.”

Studies and surveys show that parents in the Philippines discipline and punish their children through the use of corporal or physical punishment such as  spanking with hand, pinching, hitting with an object, twisting the child’s ear, pulling the hair, slapping the face or head, confinement in a sack, or shaking. Filipino children also experience threats of physical punishment and humiliating treatments such as being shouted at in front of others, labeling and denigration.[/tab]

Since the world entered the era of globalization, the challenge in penetrating the global market has began. For governments and the development community, this posed an opportunity to maximize globalization and use it towards the attainment of poverty reduction contributing towards the achievement of a better quality of life — where people are afforded equal opportunities in the aspects of economics, health, and politics, among others.

The principles of Value Chain Development (VCD) have been very instrumental in attaining these objectives. Understanding VCD facilitated government and civil society interventions in ensuring participation of small-scale producers in the international trade –penetrating the international market.

Featuring incisive policy analysis of specific population and human development issues and/or bills that illustrate the cause and effect of issue/s at hand and provide policy options and recommendations. 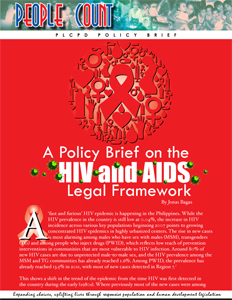 A ‘fast and furious’ HIV epidemic is happening in the Philippines. While the HIV prevalence in the country is still low at 0.04%, the increase in HIV incidence across various key populations beginning 2007 points to growing concentrated HIV epidemics in highly urbanized centers. The rise in new cases is most alarming among males who have sex with males (MSM), transgenders (TG) and among people who inject drugs (PWID), which reflects low reach of prevention interventions in communities that are most vulnerable to HIV infection. Around 80% of new HIV cases are due to unprotected male-to-male sex, and the HIV prevalence among the MSM and TG communities has already reached 1.6%. Among PWID, the prevalence has already reached 13.5% in 2011, with most of new cases detected in Region 7. 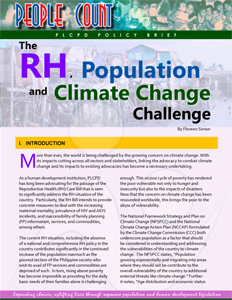 More than ever, the world is being challenged by the growing concern on climate change. With its impacts cutting across all sectors and stakeholders, linking the advocacy to combat climate change and its impacts to existing advocacies has become a necessary undertaking.

As a human development institution, PLCPD has long been advocating for the passage of the Reproductive Health (RH) Care Bill that is seen to significantly address the RH situation of the country. Particularly, the RH Bill intends to provide concrete measures to deal with the increasing maternal mortality, prevalence of HIV and AIDS incidents, and inaccessibility of family planning (FP) information, services, and commodities, among others. 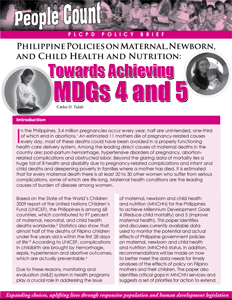 In the Philippines, 3.4 million pregnancies occur every year, half are unintended, one-third of which end in abortions.1 An estimated 11 mothers die of pregnancy-related causes every day, most of these deaths could have been avoided in a properly functioning health care delivery system. Among the leading direct causes of maternal deaths in the country are: post-partum hemorrhage, hypertensive disorders of pregnancy, abortionrelated complications and obstructed labor. Beyond the glaring data of mortality lies a huge toll of ill health and disability due to pregnancy-related complications and infant and child deaths and deepening poverty in families where a mother has died. It is estimated that for every maternal death there is at least 20 to 30 other women who suffer from serious complications, some of which are life-long. Maternal health conditions are the leading causes of burden of disease among women.