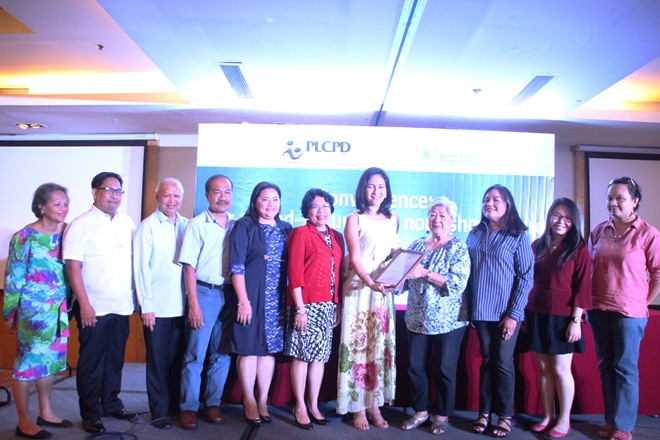 With the support of World Food Programme (WFP)-Philippines, the Philippine Legislators’ Committee on Population and Development (PLCPD) hosted Convergence: for a food-secure and nourished future, an advocacy planning conference for food and nutrition security. Multi-sectoral representatives, including members of the executive and legislative branches of government as well as civil society organizations, participated in the conference at Crowne Plaza, Galleria Manila, in Quezon City on July 20. The aim of the conference was to foster cooperation among stakeholders, and for the participants to agree on a unified agenda on food and nutrition for the next six years.

The event began with a review of the state of food and nutrition security in the country, and the importance of government and civil society working together for its improvement, especially in the advent of a new administration. Ifugao representative Teddy Baguilat, also PLCPD’s Vice Chair for Luzon and former Chair of House of Representatives (HOR) Committee on Agrarian Reform, opened the conference with a review of the relevant and current issues and bills regarding food and nutrition security. Representative Baguilat also stressed the continuing prevalence of hunger, and PLCPD’s commitment to prioritize food and nutrition security in the organization’s legislative agenda, by concretizing recommendations and providing venue for engagement among stakeholders.

There was also a panel of speakers from various organizations relevant to food and nutrition security.
Mr. Martin Bettelley, WFP Deputy Country Director, located food and nutrition security in the framework of basic human rights. He also emphasized the importance of nutritious and safe food in the battle against malnutrition, especially among Filipino children. He also discussed current WFP programmes, such as country-wide capacity-building efforts in standardizing and automating food pack production, and school feeding programs in Mindanao.

Assistant Secretary Elmer Distor of the Department of Agrarian Reform (DAR) emphasized the connection between life and land, especially among farmers. He stressed rice self-sufficiency as a possible solution to the stabilization of staple food supply. Nonetheless, land use conversion and problems in the implementation of agrarian reform are among the most serious issues faced by farmers. He also discussed the Duterte administration’s aims to provide support services to farmers, such as free irrigation, provision of fertilizers, and deferment of amortization payments.

Dr. Cecilia Acuin of the Food and Nutrition Research Institute (FNRI) acknowledged nutrition as a foundation of health, and called for a whole-of-society approach to food and nutrition programs. Dr. Acuin emphasized the co-existing states of sobra (overweight or obese) and kulang (underweight, stunted, or wasted) among Filipino adults and children, respectively, and the prevalence of nutritionally-at-risk pregnant women.

Director Angel Imperial Jr. of the National Food Authority (NFA) emphasized the need for more awareness and consideration of food and nutrition security, particularly in mitigating rice wastage, and the likelihood of the country entering a free market of rice in 2017. Director Imperial also discussed the need for legislative oversight and intervention in ensuring a functional inter-agency mechanism for food and nutrition security.

AAMBIS-Owa representative Sharon Garin, PLCPD Vice Chair for Visayas and former chair of the HOR Special Committee on Food Security closed the morning by sharing the results of a PLCPD evaluative study on the implementation of three landmark laws on food and nutrition, namely, the Nutrition Act of the Philippines, the National Food Authority Act, and the Agriculture and Fisheries Modernization Act of the Philippines, and emphasized the need for better coordination, budget legislation, and oversight on implementation of laws, particularly at this opportune time.

In the executive arena, common goals include: improved implementation of existing programs; enhanced coordination between and among organizations and government, especially the nutrition-focused National Food Authority and National Nutrition Council; localization of national policies; improved data management and inclusivity; the pursuit of investment in research and development; promoting agriculture and farmers’ education; stronger social protection services for farmers and fisherfolk; strengthened regulation for food safety and less wastage; promoting correct feeding practices among young children and exclusive breastfeeding for infants; and the acknowledgment of the need for multisectorality in addressing food and nutrition goals.

In the legislative arena, common goals include: the pursuit of meaningful legislation such as the National Land Use Act, First 1,000 Days, Right to Adequate Food, National School Feeding Program, Completion of Land Acquisition and Distribution, National Farm Bill, Freedom of Information Act, and other proposals to strengthen governance structure on food and nutrition security; the urging of Congress both to perform its oversight function and to ensure sufficient funding through the General Appropriations Act, for full implementation of relevant laws.

Other agreed-upon concerns include the importance of an inclusive and rights-based approach to food and nutrition security, as well as the climate resiliency of interventions.

The agenda was embodied in a statement that was read and turned over to Senator Risa Hontiveros, who committed to work with other policymakers on pursuing the actions listed in the agenda. A briefing with the media was also part of the event.—Patricia Nicole N. Tan